The tool of empire-building

In part eight of our online exhibition "Ingenious inventions – Innovative ideas: Episodes from the history of ancient technology", we'll be looking at the empire-building instrument of the Romans, the groma.

The Roman Empire was built using an ingeniously simple instrument, the groma. Its name is derived from the Greek gnomon, which referred to the shadow caster of a sundial. The lower part of the groma, the so-called ferramentum, was a wooden staff ending in an iron shoe, which was set into the ground. A horizontal bracket was fitted into the collar at the top of the staff. At the curved end of the bracket they placed the essence of the instrument: a rotatable wooden cross with arms of equal length encased in thin iron sheeting. This was called the stella, but groma could also refer to this part alone. Hanging from each of the four ends of the cross was a line with a plummet tied to each. From Antiquity we only know of one find which was undoubtedly a groma; this was found in 1912 in Pompeii. There are also finds from Pfünz in Germany and Fayum in Egypt which some researchers consider to be gromae. The groma reconstruction presented at the Aquincum Museum’s ‘Ingenious Inventions – Innovative Ideas’ exhibition was made by Ádám Vecsey based on the find from Pompeii, using the detailed publication by Metteo Della Corte. 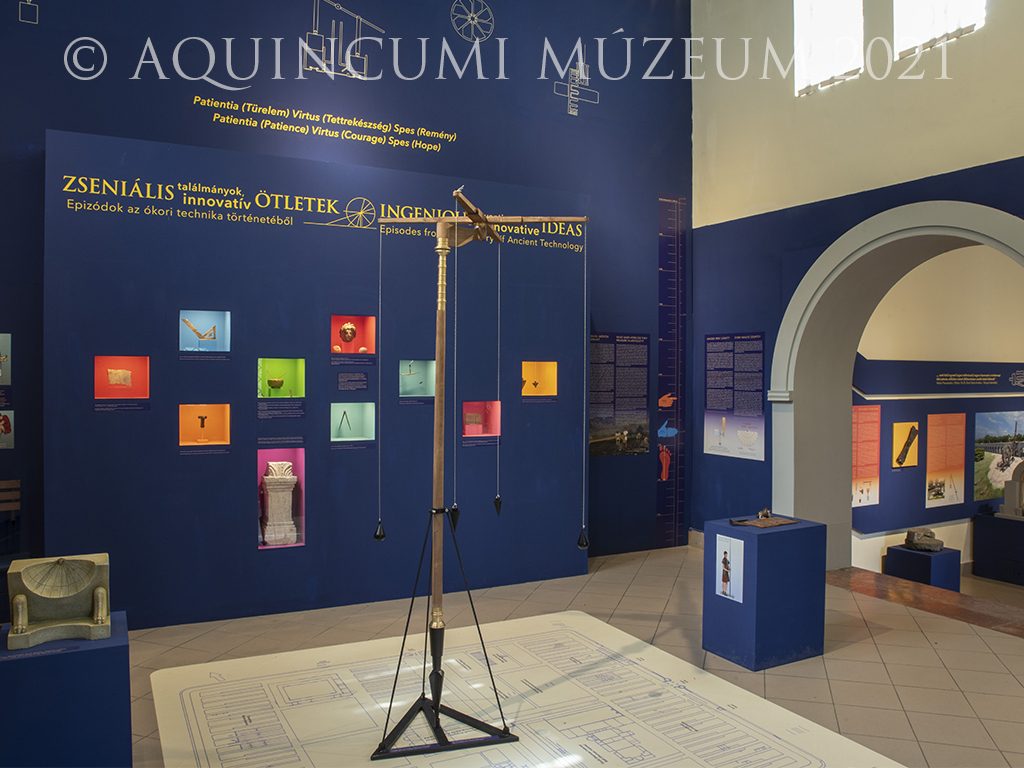 Gromae were used to plot straight lines and right-angles. With them they marked out the two main axes – the cardo and decumanus maximus – of towns being established as well as the streets parallel to them. They were also indispensible for setting up military camps in accordance with the standard layout. At the centre of the camp was the ‘groma point’. That was where the two main axes intersected and from where they – as the main roads of the camp – led to the camp’s four gates.  The other streets and buildings in the camp were aligned to these. Furthermore, gromae were also used for dividing up the lands around towns into plots in the process known as limitatio or centuriatio. 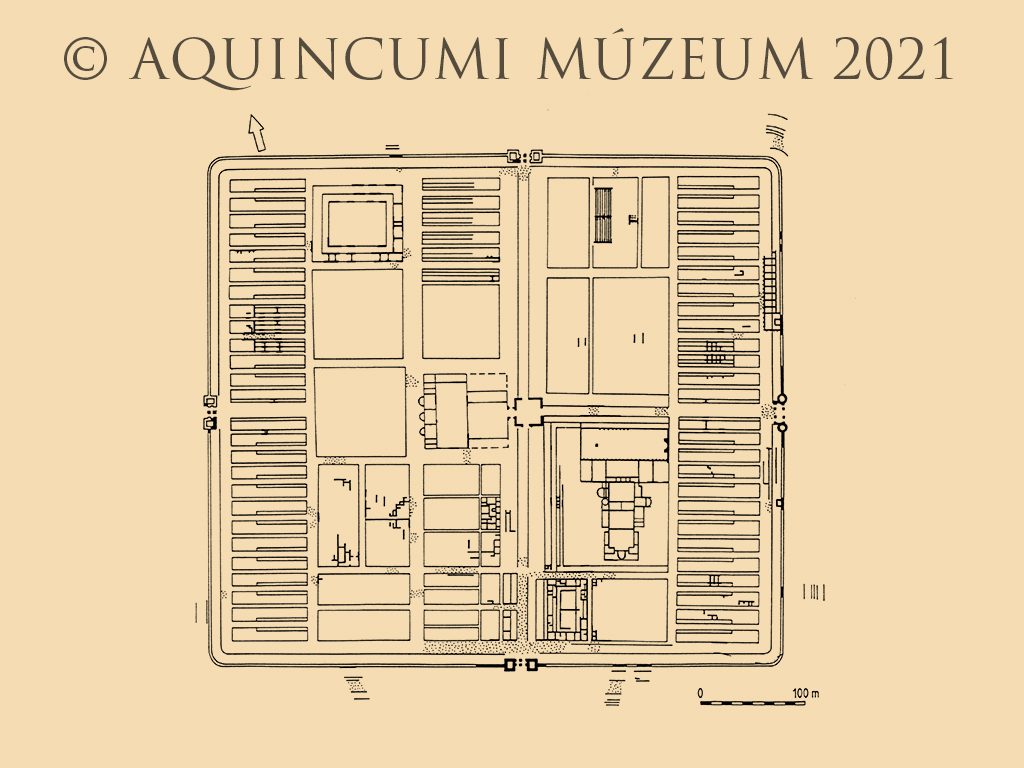 Fig. 2. The plan of the Aquincum legionary fortress standing on what is now Flórián Square in Óbuda

In addition to the find from Pompeii, we have two extant depictions of the instrument from Antiquity: one on the tombstone of surveyor Nicostratus Popidius (also from Pompeii) and the other on the memorial stone of Lucius Aebutius Faustus found in Ivrea.

Groma users, i.e. surveyors, also named after their instrument, were called the gromatici, though most often they were referred to using the term mensores, or the more accurate agrimensores. They were frequently employed in the army, as the construction of camps and other structures built by the military required as many specialists with technical know-how as possible. We also know of two mensores from Aquincum. One of them was Aelius Rufus, land surveyor of the legio II Adiutrix, who set up an altar to Jupiter. The other mensor was called Aurelius Deipas, who, together with his wife, buried their dearest daughter – who died at the age of nine months – in a sarcophagus discovered in 1932 at 23 Szemlőhegyi Road. 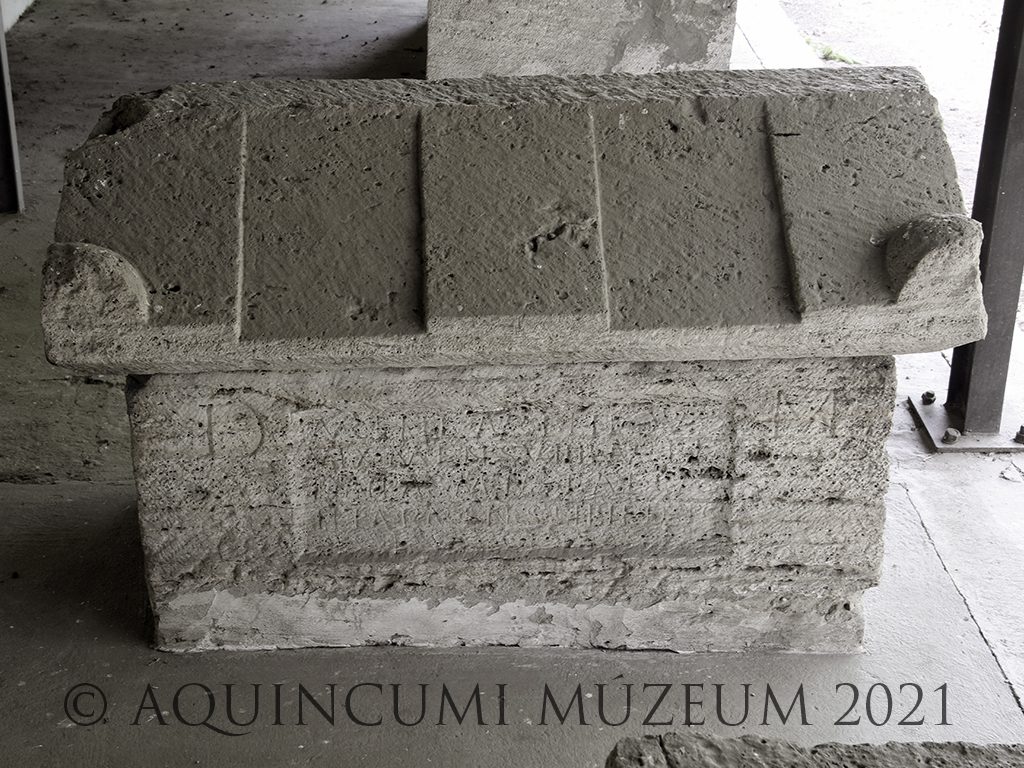 Fig. 4. The sarcophagus of Aurelia Aurelia from Rózsadomb (‘Rose Hill’), set up by her father Aurelius Deipas mensor and mother Aelia Cashia(?). (Photograph by Péter Komjáthy)

How did they use the groma?

This time we will not be presenting tips on making a groma at home. Instead we will show you how the instrument was used with a short film shot on Flórián Square in Óbuda, in the southern part of the Aquincum legionary fortress with the help of re-enactors Attila Gonda, Vilmos Lenár, and Gergely Frits.

We can learn about how the groma was used from descriptions by ancient surveyors. The writings, documents and laws on surveying were compiled in the 5th century. This collection is called the Corpus Agrimensorum Romanorum, also known as the Gromatici veteres. Surveyors first plotted the two main axes, the cardo maximus and the decumanus maximus. These were oriented based on either the cardinal directions or other considerations, such as an existing road, important features of the terrain, or enemy territory. According to Hyginus Gromaticus, a writer on land-surveying, the best way of marking the cardinal points is to draw a circle on a flat surface and stick a shadow caster in the middle so that its shadow at times falls inside the circle. From sunrise we then observe the shortening of the shadow and mark the point where it reaches the circle. We similarly note when the shadow leaves the circle, marking that point as well. Once we marked the two points on the circle, we connect them with a straight line. We connect the midpoint of the line with the centre of the circle. This line (the north-south direction) marks the cardo, while a line drawn perpendicularly to it (the east-west direction) marks the decumanus. (I would like to thank Andrea Barta for translating the original Latin text.)

The starting point of survey, also called the groma, was marked with a marker or a pole. For making a precise mark, a fifth plummet hanging from the middle of the instrument could also be used. This indicated the position of the middle of the cross, the so-called umbilicus soli on the ground. For the surveying work afterwards this plummet was removed; no such piece was discovered with the Pompeii find either. During the survey, the surveyor stood next to the groma, while his assistant walked ahead a given number of paces in the required direction carrying ranging poles. The surveyor could plot a straight line by looking through two strings hanging from opposite ends of the groma. The two strings and the ranging pole held by the assistant had to be on the same line. When this happened, the point was marked and the process was carried out again a given distance away until the straight line had been plotted for the required area. Afterwards, they plotted lines perpendicular to this straight line. They did this by looking through the other pair of strings hanging from the groma and set the next ranging pole accordingly. After plotting the lines, they also carried out checks on the way back. Furthermore, given that the two pairs of plummets from the Pompeii find were of different shapes, some believe that at a certain point they would also turn the stella around to verify the plotted lines and, more precisely, the accuracy of the instrument. Once the two main axes had been marked from the groma point, they then continued at a given distance away from these – e.g. 2400 feet away in the case of dividing up the lands around settlements – to plot the other directions and routes.

Plotting a straight line and a perpendicular line using the Roman surveying instrument, the groma (Filmed by Nóra Szilágyi, in Hungarian with English subtitles)

When using the instrument accurately, straight lines could be plotted fairly correctly. The simple instrument, however, had a draw-back: when the wind blew the strings, it was impossible to use it. To decrease the disturbing effect of the wind, in his work On the Dioptra, Heron of Alexandria recommended that the plummets at the end of the strings should hang down into a large wooden cylinder. But it was even better to use a dioptra instead of a groma. This instrument was in all likelihood considerably more advanced, but unfortunately it did not survive at all. Based on ancient descriptions – primarily Heron’s incomplete and partially reworked text – it likely consisted of a disc with the degrees marked, and, on top of it, two sights on a rotating axis. The disc rested on a semicircular toothed bronze plate perpendicular to it, which, with the help of screws, could be moved and fixed in position on the vertical axis below. It could likely be used for measuring angles, levelling, and also determining distance and height. 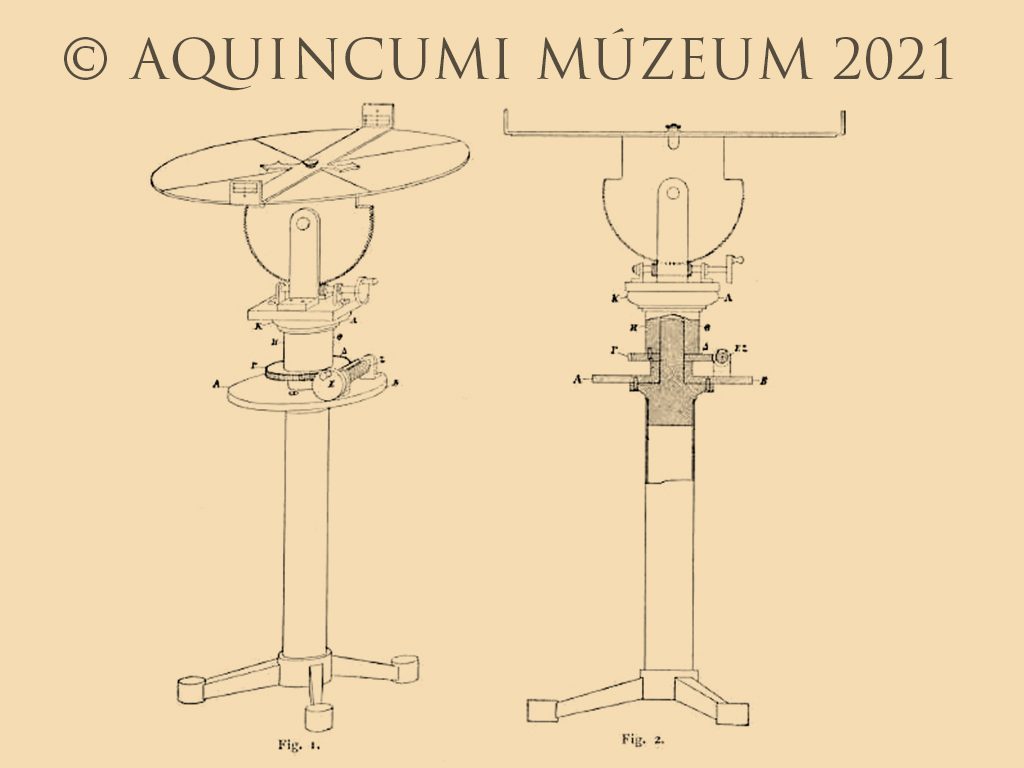 In addition to the groma from Pompeii other pieces equipment belonging to the ancient surveyor also came to light. The Romans used a uniform system of measurement. The 10-foot-long measuring rod, the pertica or decempeda, was made of wood or reed with a bronze shoe at both ends. Its depiction can be seen in Rome on the grave altar of Titus Statilius Aper. The ranging poles used with the groma were smaller but similar. These were called metae. Among the equipment of the surveyor from Pompeii the measuring rods’ bronze shoes also came to light, though the rods themselves did not. The collection of tools also included a foot-long (29.7 cm), foldable bronze ruler and a small ivory box with smaller measures incised on the side. 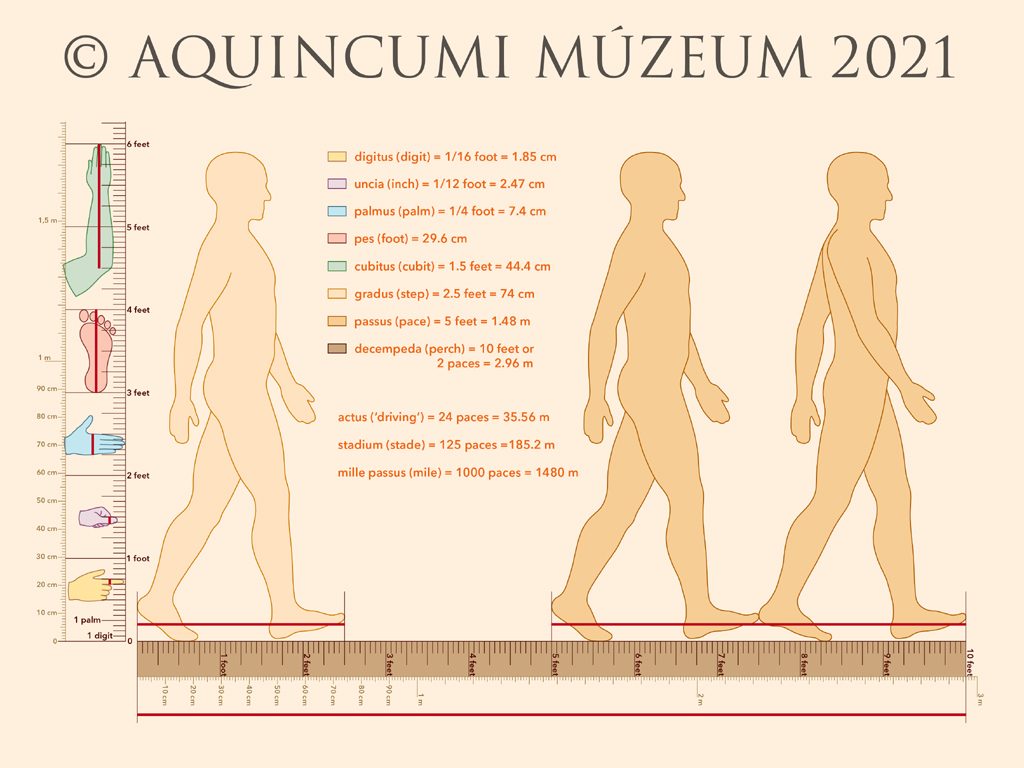 The aforementioned small ivory box was very handy; its lid could be used as a sundial. The fragment of a marble “pocket watch” also came to light in Aquincum near the Military Town amphitheatre of Nagyszombat Street. One side was a sundial, while the other could be used during the spring and autumn equinox to check the north-south and the perpendicular east-west directions, as well as the latitude and longitude of the given place.

Fig. 7. The two sides of the Aquincum sundial (Photograph by Péter Komjáthy)

Click here to read the other entries of our online exhibition.

From 2 November 2021, winter opening hours and ticket prices apply at the Aquincum Museum. Due to renovation and maintenance works, between 1 January 2022 and (foreseeably) 31 January 2022, the BHM Aquincum Museum and Archaeological Park will be closed!

A 7000-year-old message: Remains of the Neolithic world in and around Budapest. The Aquincum Museum's temporary exhibition can be visited until 30 December 2021.