The Aquincum traffic jam blog, which brings you Óbuda’s hidden and not-so-hidden Roman remains, is back on the road. Next up: the luxurious house between modern-day Búvár and Folyamőr Streets in the Aquincum Military Town!

So where are we now?

Last time we visited the amphitheatre of the Aquincum Civil Town. We now head towards the northern part of the ancient Military Town. We make our way down Szentendrei Road towards Árpád Bridge. Going past Bogdáni Road, we spot after some 150 metres to our left, between the high rises of the housing estate, a park which hides the so-called Búvár-Folyamőr Street “villa”.

But first the history!

In the northern strip of the Military Town (canabae) which developed around the Aquincum legionary fortress were the elegant houses of the town elite. An excellent example is the so-called Hercules villa – noted for its mosaic floors – in Meggyfa Street, or the easternmost member of this series of luxurious houses, the “villa” located between Búvár and Folyamőr Streets. 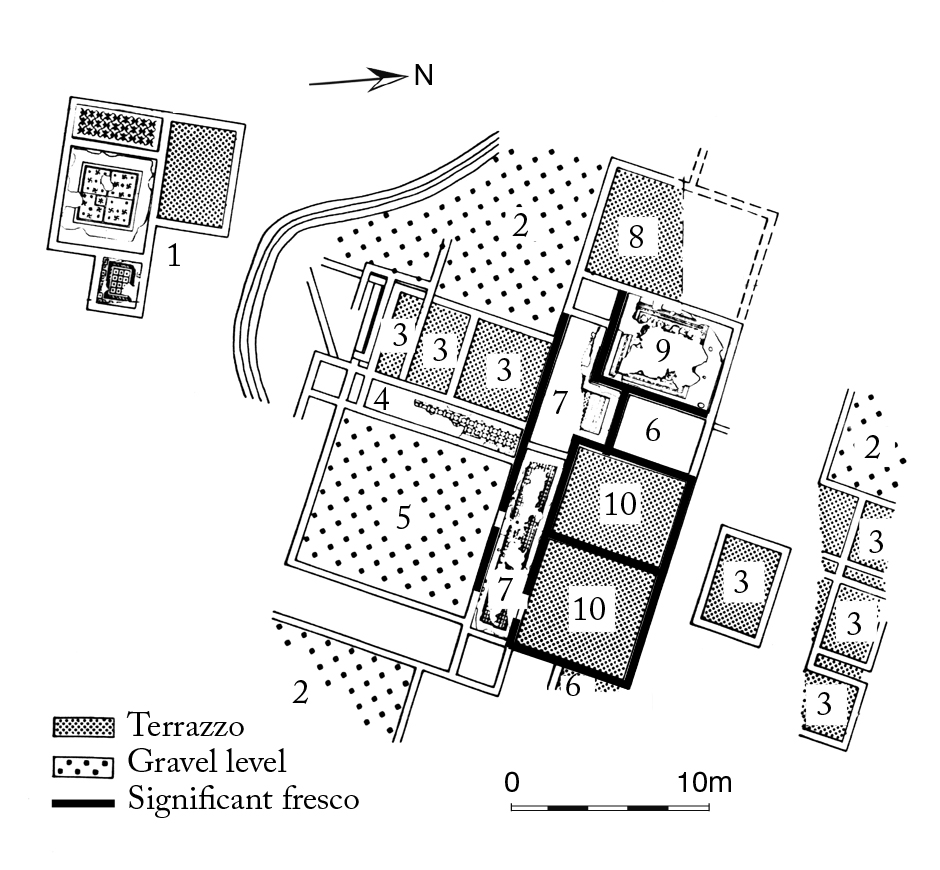 The modern name is somewhat misleading, as villa in the Roman period referred to an estate centre which included buildings and spaces for production as well as the (typically luxuriously-appointed) residence of the owner. Archaeologists have unearthed a number of estate centres around Aquincum as well. The “villas” in the northern strip of the Military Town, however, were actually richly-decorated townhouses.

The elegant house between Búvár and Folyamőr Streets was excavated between 1974 and 1981. Earlier on, this area near the Danube may have belonged to the fort of an auxiliary unit. The dwelling house was built in the first half of the 2nd century CE; it was afterwards luxuriously remodelled and enlarged at the turn of the 2nd and 3rd centuries. The rooms were then partly repainted. The remains of wall paintings – white and colourful, with animal, geometric and vegetal motifs – were found in some cases to a height of 1-1.5 metres in situ (in their original place) by the archaeologists! 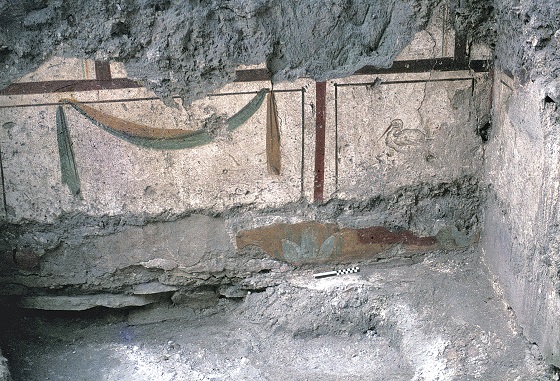 Detail of the bottom zone of a wall painting from the so-called Stork Room: red frames against a white background, with yellow-green drapery and stork motif. A vegetal motif can be seen below from an earlier period

Archaeologists uncovered 16 rooms, 2 geometrical mosaic floor-decorated corridors (no. 4 and 7 on the plan above). Also belonging to the house was, among others, a paved, colonnaded courtyard (peristyle – no. 5 on the plan).

In one of the most beautiful rooms (no. 8 on the plan) of this ‘town palace’ some 200 stucco fragments came to light, including the fragments of ornamented cornices, palm tree trunk-shaped pillars, and figural (e.g. male and female figures) as well as vegetal (e.g. bunches of grape) depictions. The stucco decoration likely depicted a festive procession (thiasus) held in honour of Dionysus, the god of wine and ecstasy). 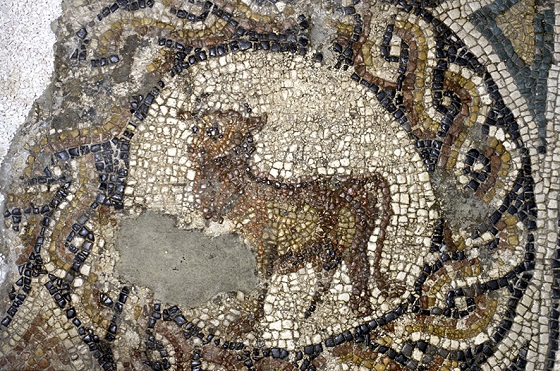 Detail of the animal mosaic from the house

The floor of the room next door (no. 9 on the plan) was decorated with an animal mosaic. At the extant edge of the mosaic’s central panel, we can see, framed by guilloche ornaments, for instance a bull, a water bird and a deer, and even the rear part of a lion can be observed.

The rich owner of the house, when he wished to have a wash, did not have to visit one of the public baths of Aquincum. The building complex, after all, had a separate bath suite! The private bathhouse (no. 1 on the plan) had four rooms, of which three were mosaic decorated: one with swastika-motifs and a stone rosette-shaped drain, another with pelta-shaped motifs, and a third which imitated a coffered ceiling.

What can we see today?

The building complex gets renovated during the 3rd century, but it is destroyed during the barbarian raids of the 260s. Later on its ruined site – like other abandoned areas of the increasingly contracting Military Town – is used for burials.

Unfortunately, we can no longer see the once luxuriously-appointed house, but the small park between Búvár and Folyamőr Streets, flanked by the tall buildings of the housing estate, reminds us how many interesting remains still lie below our feet.

Soon we’ll continue our search for Roman remains as there are still plenty of other hidden and conspicuous monuments to discover in Óbuda; but more on those later.

The photographs were taken by Ilona Molnár and Péter Komjáthy.

Szirmai, K. (2016) Area of a decorated dwelling house. In: Zsidi, P. (ed.) Archaeological Monuments from the Roman Period in Budapest. Walks around Roman Budapest. Budapest 2016, 45-46. (Available at the Aquincum Museum).

Click here to read the previous entries of the Aquincum traffic jam blog.

Due to renovation and maintenance works, the Aquincum Museum and Archaeological Park will be closedfrom 17 January 2022 until 14 February 2022!