1/4
Online museum / Blog / Ctesibius: The barber of Alexandria – the father of pneumatics

Ctesibius: The barber of Alexandria – the father of pneumatics

As part of our new temporary exhibition “Ingenious inventions – Innovative ideas: Episodes from the history of ancient technology” we are regularly presenting online 2000-year-old innovations in science and technology, and give tips on how those interested can become ancient engineers. At the heart of our first episode is Ctesibius: The barber of Alexandria - the father of pneumatics.

The scientist, who primarily studied the properties of air, and who is known by posterity as the father of pneumatics (from pneuma = air) lived and ‘operated’ during the early-3rd century BC. He presumably lived in Alexandria and perhaps worked and taught at the scientific centre of the time, the Musaeum. Ancient tradition has it that he wrote at least two books on his research, one on theory, and another on the inventions he used to examine the theoretical questions in practice.  These works did not survive. Later authors, however, took excerpts from his treatises, and so the teachings of Ctesibius can be not only reconstructed, his inventions also stayed in use later on during the Renaissance and the modern period. Moreover, his most successful innovation can still be found to this day in our churches and concert halls. This invention is none other than the organ.

Details from Ctesibius’s life are preserved in the works of two ancient authors. According to Athenaeus, he was a barber, and Vitruvius writes that Ctesibius invented the organ in his father’s barbershop. The keen experimenter, who “found joy in artificial things,” wanted to suspend a mirror in a concealed way, so that it could be moved up and down. Ctesibius pulled the cord holding the mirror along the barbershop’s ceiling, enclosing it in a tube. Then, also in a tube, he let the cord hang down in the corner of the room, placing a lead ball on the end of the cord as counterweight. While adjusting the height of the mirror, he noticed that the air, compressed by the lead ball, produced a whistling sound as it escaped through the narrow hole of the tube. This was what reportedly gave him the idea for inventing the organ. 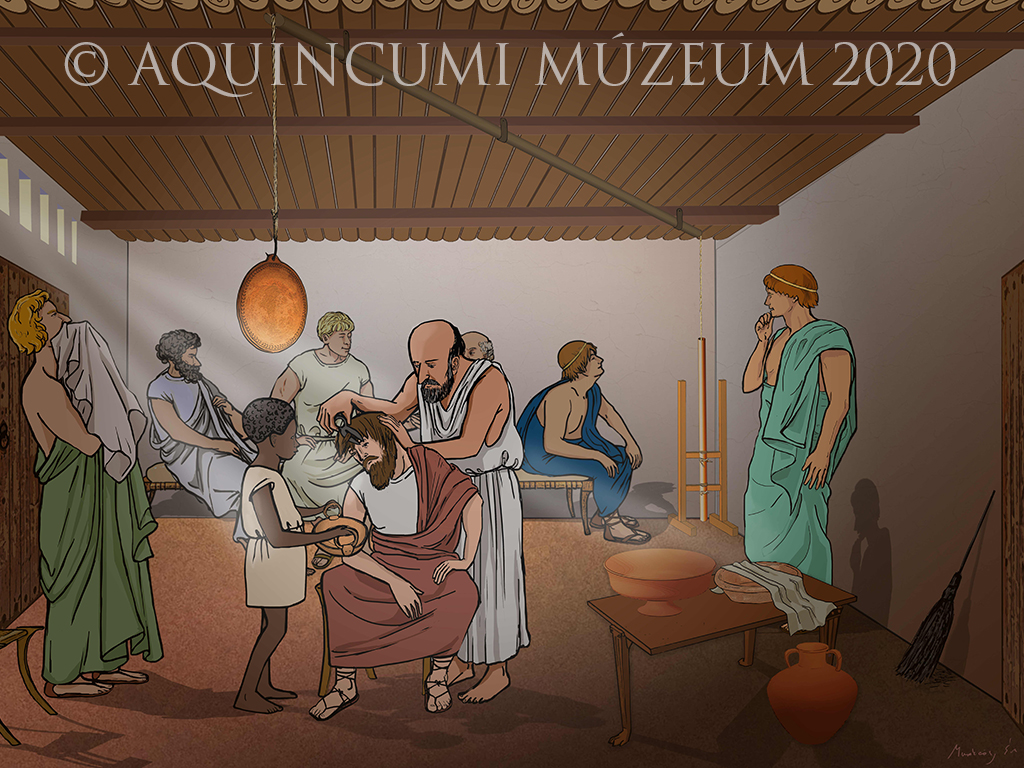 Ctesibius’s other important idea was the piston-pump, which could be used for raising water. 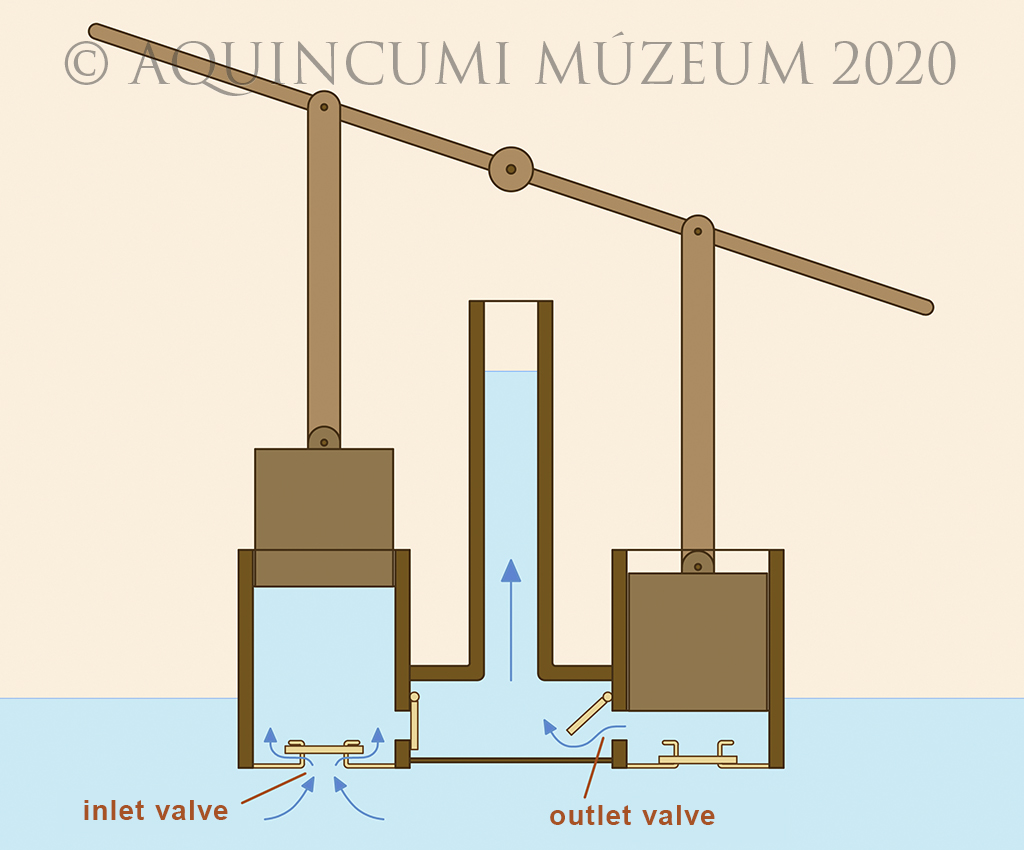 How the pump invented by Ctesibius works (drawing by Tamás Lajtos)

His invention also became widely used in practice; its description survives in the accounts of Vitruvius and Heron, hence the device is known by posterity as the pump of Heron. Just how ingenious the invention was is shown by the fact that it was used not only in Antiquity and the Middle Ages; fire pumps until the 19th century operated based on the same principle. Furthermore, piston pumps and compressors are still in use today in several areas of industry. According to a 1615 book by Venetian architect Vincenzo Scamozzi, a pump of this kind was also used to bring water to the Buda Castle.

Heron’s (that is Ctesibius’s) pump, used to bring water to the mediaeval Buda Castle (animation by Zsolt Fodor).

In case of the organ, too, Ctesibius used the pump for providing the air required for sounding the pipes. He made a water container below the organ, into which air was pumped. The constant air pressure was regulated by the water in the container; hence the instrument was called a water organ. 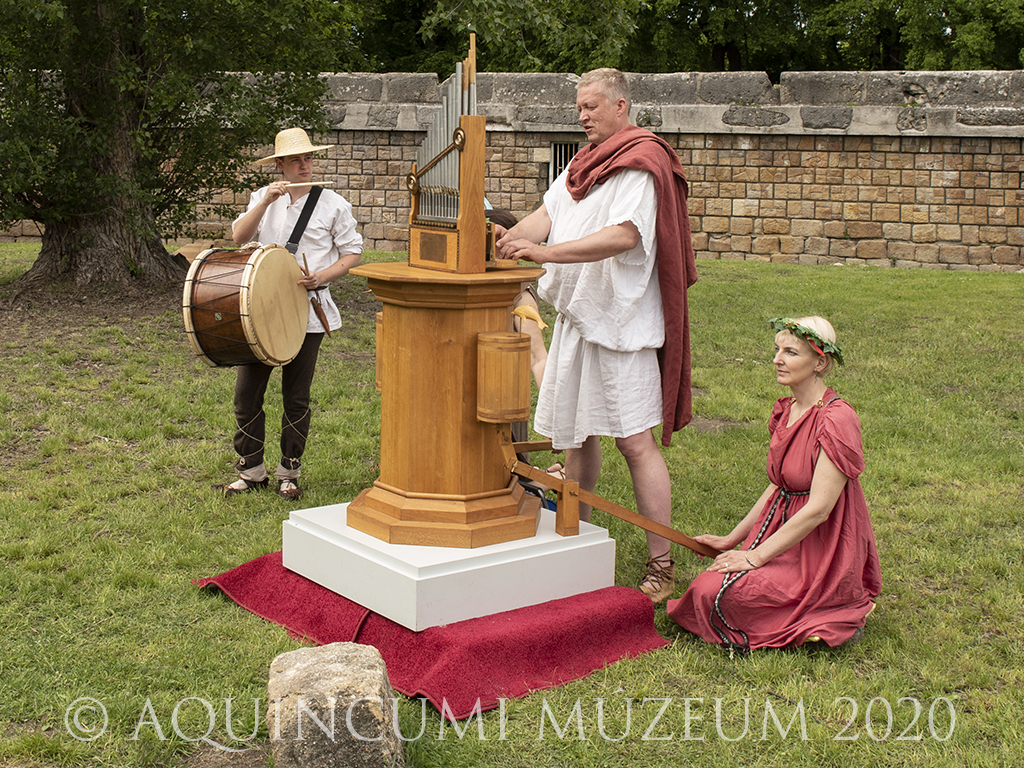 One of Ctesibius’s experiments even attempted to power a catapult using an “air spring” i.e. a piston pump. Additionally, he was the first to create, with the help of compressed air, little automatic devices like an artificial chirping bird. He was also the first to make an accurate clock, which showed the time with the help of water, and through a rack-and-pinion mechanism could move around little figurines and pillars or make sounds using a whistle. 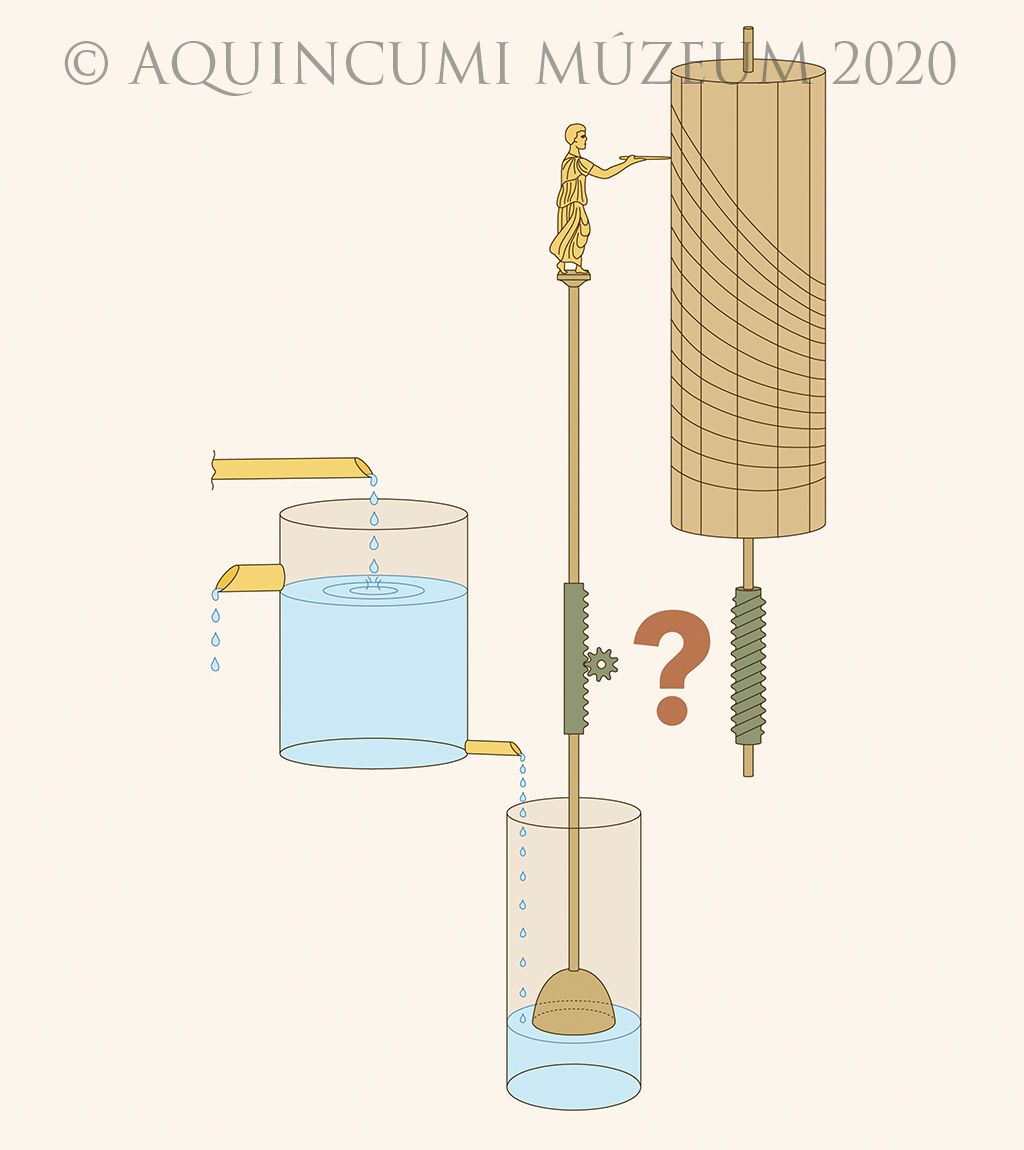 How does it work?

Ctesibius’s water organ was operated by forcing air, using an air pump (piston compressor), into a vessel open at the bottom, the so-called pnigeus, which stood in a water container. In the pnigeus the water level decreased, while around it, in the container it increased. A tube connected the pnigeus and the pipes, which were placed above the container. If the way to the pipes was open – i.e. a key was pressed – the compressed air from the pnigeus flowed towards and sounded the pipes. The pipes would sound until the water levels in the container and the pnigeus became equal, or, more precisely until the compressed air forced out as a result could continue to sound the pipes. Therefore, contrary to popular belief, it was not water that operated the organ; it was the difference in water levels that provided the constant air pressure, that is to say water regulated the air pressure. 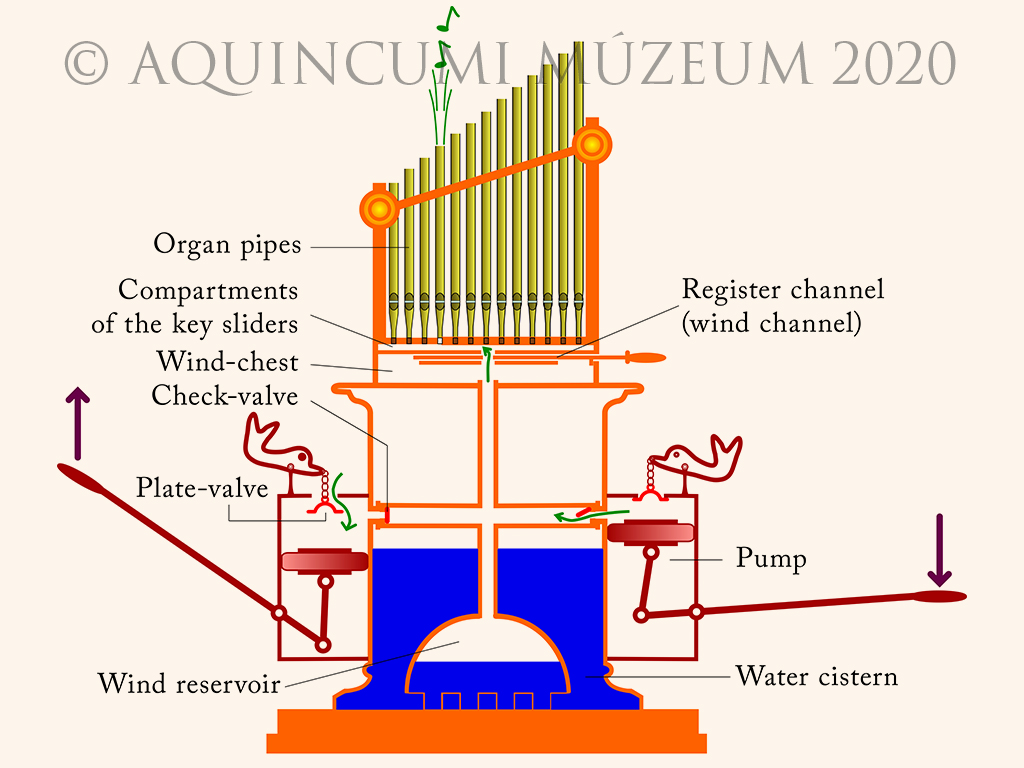 How the water organ works (drawing by István Németh)

Of course, we cannot build a real instrument, but with a simple experiment we can model how water organs worked. What we need are: a large 5-litre glass jar, a 1.5-litre plastic bottle, a small plastic whistle (e.g. from a New Year’s Eve party pipe), a pair of scissors or a sharp knife, some kind of sealant (I used craft foam), and, naturally, water. Kids, ask for help from an adult for the experiment!

Cut off the bottom of the plastic bottle. Drill a hole in the cap, big enough for the whistle to fit. Place the whistle in the hole with the craft foam – that way that air does not escape around the whistle.  Fill the glass jar just over halfway with water. (You can also add food colouring to the water.) Screw the cap on the bottle, and place it gently in the jar. Here comes the exciting part! Hold the bottle in one hand. Cover tightly the top of the whistle with your thumb, and then firmly push the bottle down. Now, lift your thumb. If all steps were done correctly, the whistle will sound. At the same time you can also see that the level of the water previously displaced now rises back again.

The whistle did not sound? Then something went wrong. Either your thumb did not cover the top of the whistle well enough, or the sealant was too loose and the air escaped. Fix these and the whistle will sound. 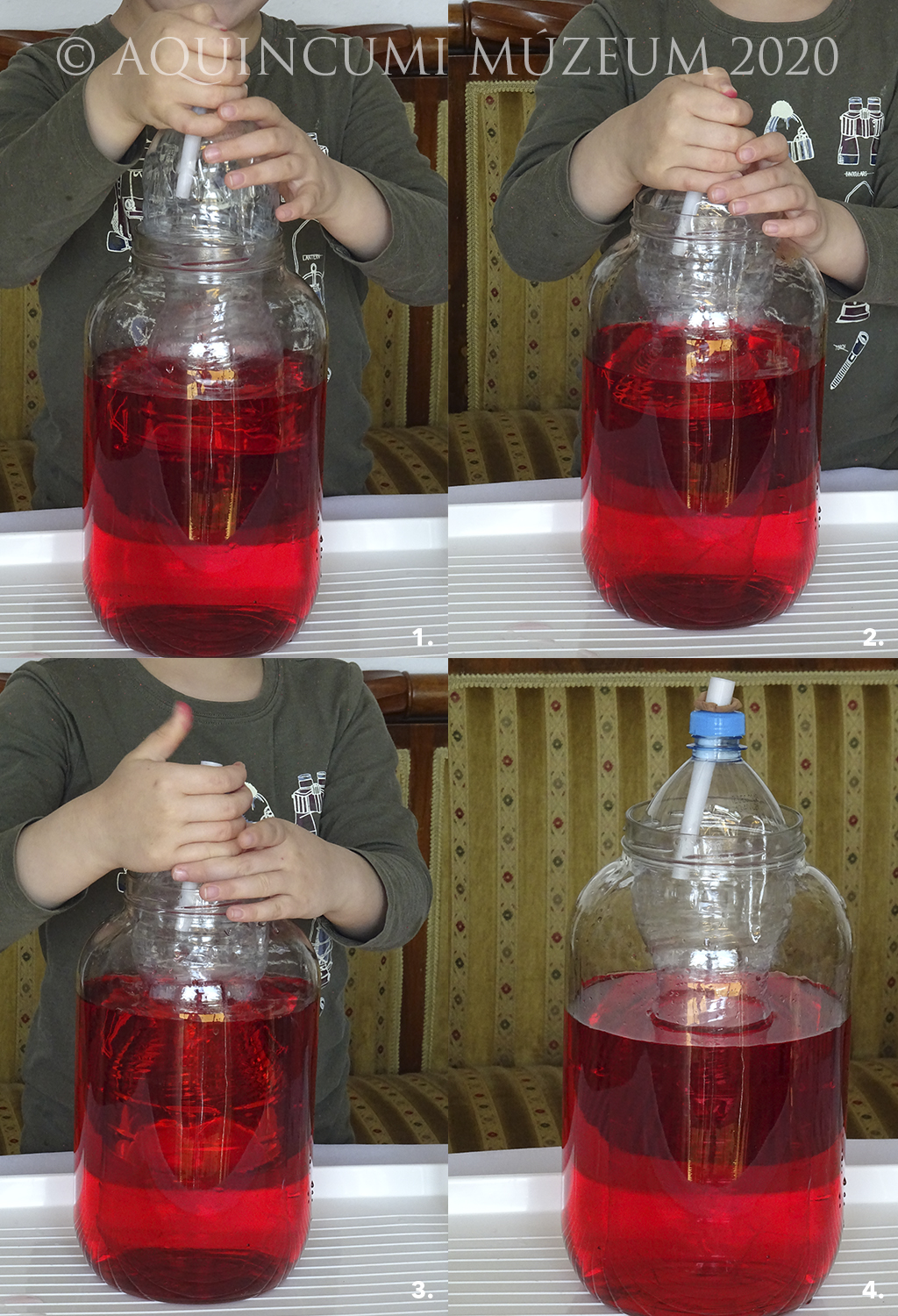 Experiment to show how the water organ works

Watch this video from the 2019 Festival of Organs at the Aquincum Museum:

Click here to read the other entries of our online exhibition.

THE MUSEUM IS CLOSED

The museum is closed from 11 November 2020 until the public health measures are lifted!

The Aquincum traffic jam blog, which brings you Óbuda’s hidden and not-so-hidden Roman remains, is back on the road. Next up: the amphitheatre of the Aquincum Civil Town!

Sorry, this entry is only available in Hungarian.